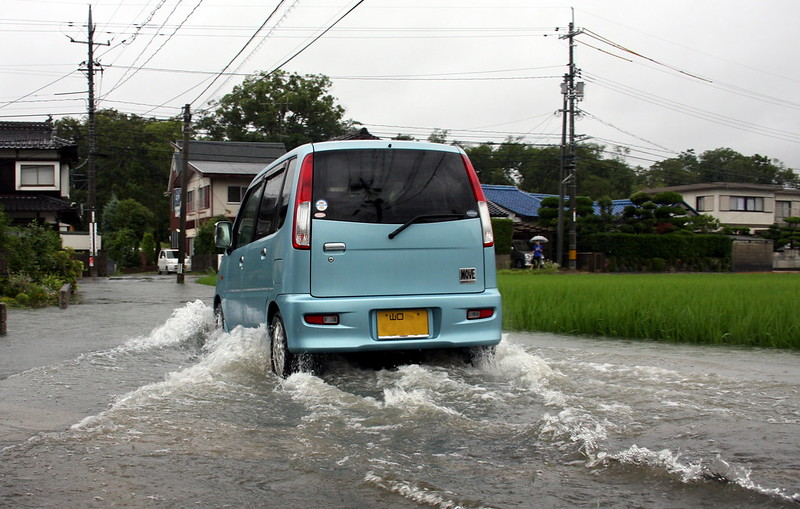 Osaka city, the second largest city of Japan, is also facing the sea just like the capital city Tokyo. In addition, because there are many rivers running through the city, flooding and tsunami are the largest concerns of Osaka city. In 1995, Osaka city experienced a significant damage along with Kobe city, which had the worst damages, due to the Great Hanshin-Awaji Earthquake. Before this quake, there hadn’t been any large earthquake for decades, therefore, this incident stunned all nation across Japan. You can live quite comfortably in Japanese cities when nothing happens, but once a disaster occurs, most city infrastructures shut down. Therefore, it is very important to know behavior standards and evacuation areas in case of emergency events.

In recent years, the degree of disasters is worsening all over the world because of the climate change, and Japan is not exception. The typhoon in 2017 and the severe rain storm in 2018 are still green in people’s memory. In order to properly prepare for unforeseeable flood disasters, Osaka city published Flood Hazard Maps of each area. Especially, Yodogawa-ku, Nishi Yodogawa-ku, Konohana-ku, Minato-ku and Fukushima-ku, whose land levels are below the sea level, are considered very vulnerable to flood damages. If these areas are included in your living space, make sure to check these hazard maps regularly. The Osaka Hazard Maps include the following information in detail.

Printed version of the maps is available at the Osaka city office, and PDF version can be downloaded from their website. Also, browse behavior standards at the time of river flooding/ rainfall inundation published on the website as well.

Japan is located on the boarder where four plates meet, thus there are many active faults that trigger earthquakes all over Japan. In fact, very minor quakes of intensity 1 -5 occur all the time on a daily basis. However, we should pay special attention to large earthquakes such as the Great Hanshin-Awaji Earthquake and the Great East Japan Earthquake. Significant disruptions that can be threat to life may occur, therefore, it is very important that you know evacuation routes and location of the nearest evacuation center.
The Osaka City Map Information Site is a website to inform people about evacuation route and evacuation areas in case of earthquake event, and shelters for tsunami incident (click Disaster Prevention/Safety [防災・安全・安心]). Also, another issue at the time of earthquake is liquefaction on roads. The Osaka city website also provides information on distribution map of possible liquefaction on roads.

As proven by the Great Hanshin-Awaji Earthquake, Osaka city can never be an exemption from huge earthquake attack. In fact, there is a concern about possible occurrence of Nankai trough earthquake.
The Disaster Preparedness Tokyo Book is published on assumption that a huge earthquake will hit Tokyo, however, the contents of this book can apply to every other city. Multilingual PDF version of the Disaster Preparedness Tokyo Book can be downloaded from the Disaster Prevention Information website, and printed version (Japanese only) is available at some book stores.

Landslide Hazard for Areas Other Than Osaka City

Osaka Plain in which Osaka city is located is not as vast as Kanto Plain, and the city is surrounded by hills and mountains. Concerns in these areas are landslides due to heavy rain. In October 2020, a few people resulted in injury and death in the landslide occurred in Ibaraki city. In order to provide credible information about disaster situations on time, Osaka city has the “Information of Landslide Damages” website that you can search hazardous areas and disaster drill simulations. In addition, the “Hinan no Kokoroe” website is very useful as a behavior standard at the time of land sliding.

Before the Great Hanshin-Awaji Earthquake, Kinki region was considered as a rather earthquake-prone area within Japan. However, as a possible risk of Nankai Trough Earthquake is becoming more likely, Osaka can no longer be irrelevant to earthquakes and tsumami. Also, there is an increasing risk of flood disaster due to severe rain storms. Osaka city is particularly vulnerable to floods because there is a vast area of which land level is below sea level. Furthermore, there is landslide risks in the surrounding areas with hills and mountains. Both Osaka prefecture and Osaka city governments are providing lots of information such as behavior standards and evacuation sites to the public. In order to evacuate safely when a disaster happens, check such information regularly as all disasters are unforeseeable.